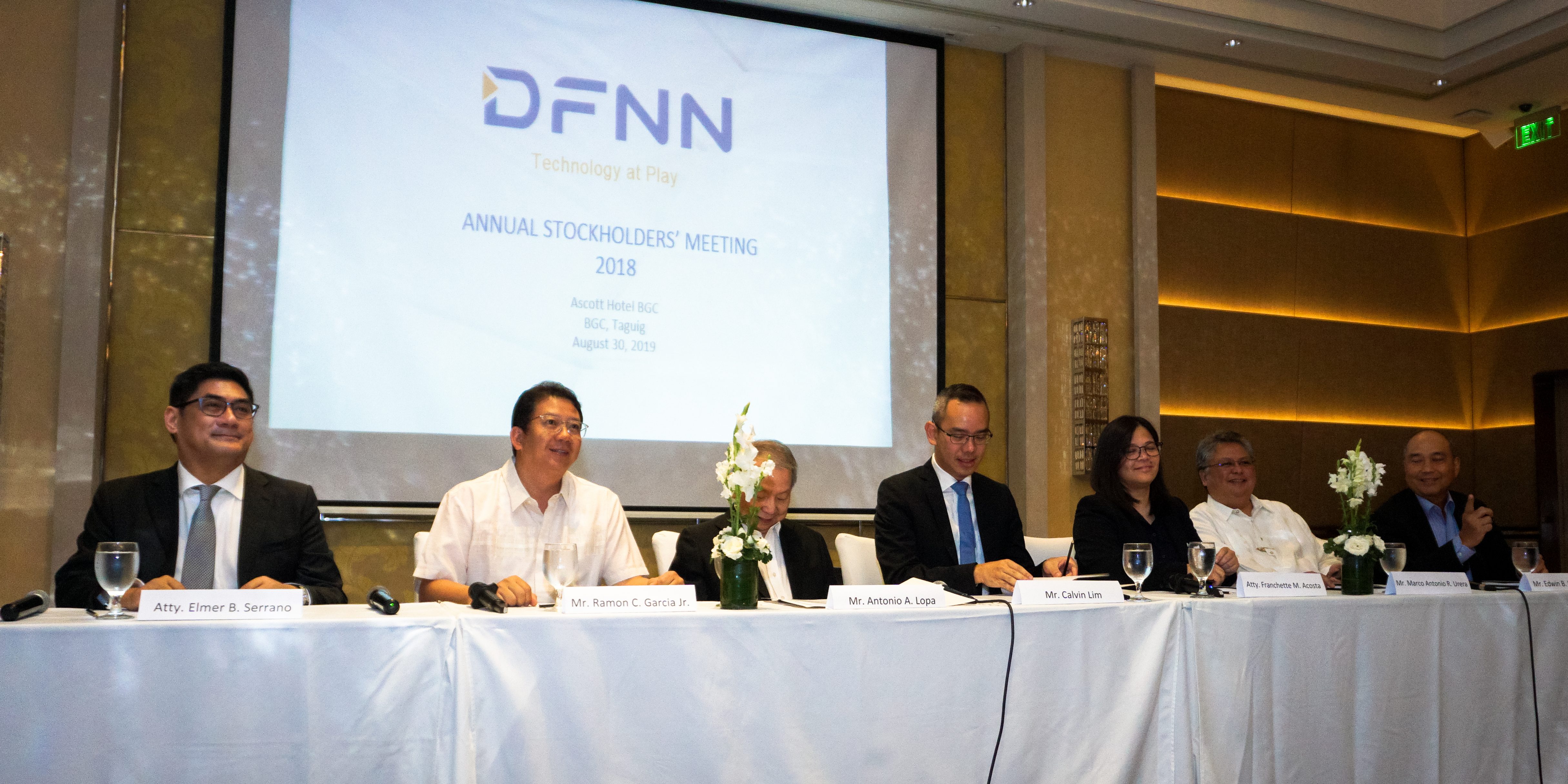 DFNN’s Chairman of the Board, Mr. Antonio A. Lopa, calling the meeting to order

DFNN’s Chairman of the Board, Mr. Antonio A. Lopa presided over the meeting. Ten (10) directors were re-elected for another term while a new independent director, Mr. James Beltran, joined the Board of Directors replacing Mr. Monico Jacob. SyCip Gorres Velayo & Co. (SGV) was re-appointed as external auditor. During the meeting, shareholders ratified the acts of the Board, notably, the grant of corporate surety in favor of DFNN’s subsidiary, Inter-active Entertainment Solutions Technologies, Inc. (IEST) for its loan to Philippine Business Bank (PBB) and the amendment of the company’s secondary purpose to guarantee obligations of entities it has legal interests in, whether directly or indirectly, have been approved respectively.

Calvin Lim, DFNN’s President and CEO, reported on the prominent milestones attained by the company in 2018. Most notably, the joint venture with CY Labs and the announcement of DCG, Inc. as a new subsidiary of the DFNN Group. On the operations side, Mr. Lim reported on the enhancements to its various platform through further upgrades to Instawin’s Unified POS (UPOS) subsystem and Cashier Management System (CAMS) reporting modules; strengthening its FinOps services through the extension of cash management support outside of Metro Manila; and the introduction of additional banking options for daily remittances. Further highlighted is the move to strengthen the company’s technology platform, in particular, its infrastructure powered by an increased network connectivity redundancy, continued improvements in transaction, data security protocols and the implementation of annual preventive maintenance to ensure uninterrupted operations.

Looking forward to 2019, Mr. Lim foresees organic growth on the subsidiary level for new outlet operators in its wholly-owned subsidiary, IEST. Over-all, he stressed the importance of strengthening control of both sides of the value chain as the group strives to continuously explore promising business verticals to power growth.